This week's portrait is of iconic, legendary, super star, one of my favorite music artist, David Bowie. 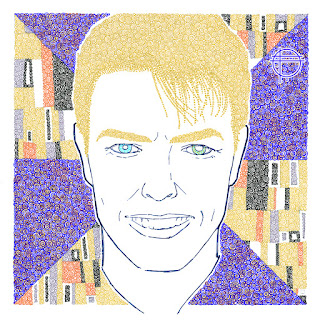 Can you believe tomorrow, January 10th, will make it one year since he died!


My very first Bowie albums were, “Changes” and “Ziggy Stardust and the Spiders a From Mars”.


I still have my actually albums too. Am glad I never got on board with the idea of trashing LPs for mp3s. There was that one time though, I was attempting to convert my albums into MP3 files, and the Recliner of Rage was born.


The gold colored ink gives it an art nouveau/ deco look. I thought I did a pretty good likeness of him but then someone I knew said she didn't know who it was suppose to be and also claimed not to really know much about his music. The second half of that sounded scary to me. Bowie in my mind is one or was one of the biggest performer in my time so far. The idea that a generation behind me has already forgotten him or doesn't really know much about who he was is really hard to imagine.


That's life I guess. You are only important in the moment and this illusion we call time, will always forget you in the future.

“I don't know where I'm going from here but I promise it won't be boring.” - David Bowie
Posted by pbdotman at 11:13 PM