COME ON GET HAPPY 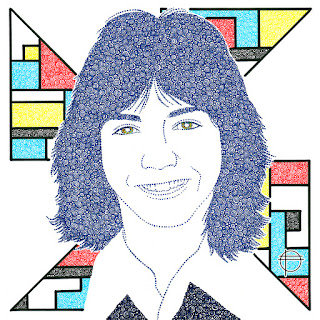 I started this portrait at the same time I was working on Lena Dunham. A strange side note, the Partridge Family came up in a random conversation during the week and I almost let it out that this was my next portrait, strange huh?


I am a big Partridge Family fan. I loved the TV show, the comics, the lunch box with the breakable thermos (had one, it broke), trading cards (still have a few around) and of course the music. I think I owned a 45 once but it no longer exist in my music collection but I do have the current CD with the best of.

I would have liked to have done a portrait of every member, or Susan Dey, who I had a MAJOR CRUSH on but decided on Keith. That decision was made back in February of this year after hearing that he was no longer going to perform live due to his health. It's sad to hear someone having to give up their passion because of health. Also I decided to do the David Cassidy I grew up on, Keith Partridge.


It hard to say which Partridge Family song is my favorite, there are so many great ones, though, “Together We’re Better” stands out because it was part of an episode which is my favorite from the television show called, “Princess and the Partridge”, it’s where Keith had to escort this visiting Princess around, only she wanted to see the “real” America, kind of like Audrey Hepburn in “Roman Holiday”, but in this case she had Keith kidnap her. Of course I fell hard for the Princess, played by Season Hubley, she was beautiful then and I am sure she’s even more beautiful now!


On this piece of art I felt like I was having a hard time with deciding what colors to use other than the bus’ primary colors. On the next one I really have to make it a point to experiment more. Take more chances and leave reality.
Posted by pbdotman at 1:03 PM No comments: 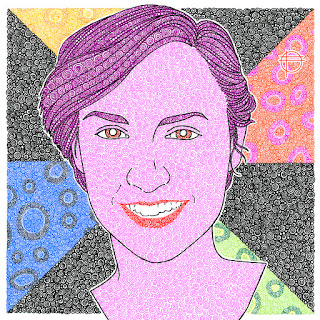 So fidget spinners are now a dying fad already? I got wind of them by accident on Amazon. The price was cheap and they seemed fun. Now that I have a collection of about 30, I can say I was right about the price and the fact that they are addictively fun.

What does that have to do with Lena, actually nothing, I just read an article about spinners while writing this and of course playing with a spinner in my left hand. It's that modern day multi tasking thing.

I became aware of Lena as a result of watching “Girls”. Watched all 5 seasons. The first episode introduce us to the last black male and any minority in Brooklyn, New York and after those first 3-4 episodes, Brooklyn looked liked the New York of “Seinfeld” and “Friends.” But to my surprise this quantum reality was fun to watch. I decided to do the portrait after watching an episode in season 4 where Lena went to a photographer to get some nudes photos taken of her. The scene reminded me of a classical, beautiful Mucha model painting. I created a nude of her based on that, but had second thoughts about posting it and instead decided to include her in this portrait series.

As with past portraits I've tried to work with colors that I feel match the subject. Though I am happy with this piece, I would love to show the nude piece of her someday.

Posted by pbdotman at 8:03 PM No comments: 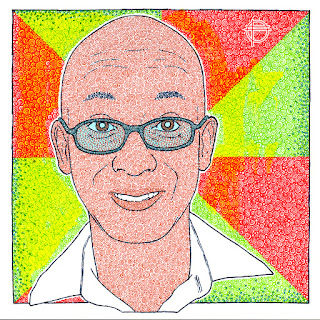 I’ve been wanting to do a portrait of Pierre for a while now but couldn’t find the time and he wasn’t exactly making this easy for me either.

I’ve known him for a while and I can say first hand he isn’t an easy person to get to know. He’s extremely private to a fault. And when you think you’ve got him figured out he might change up on you, which can be annoying. I know he’s reading this and saying it’s not true but am sorry friend, it is. But he is a good guy, a decent artist, and he collects way too many toys (Not trying to get on your bad side but you really do have too many “toys”).

This portrait was fun to work on. It was almost like looking in a mirror in some ways and seeing myself. Originally I was going to render him with his usual blank expression but thought I’d bring some life to his face by making him look happy and surprised. I also wanted to use his favorite colors, green and turquoise blue. The red I picked up on from seeing a icon drawing of him on social media.

Posted by pbdotman at 1:54 PM No comments: