This Week's Portrait is, Stan Lee! 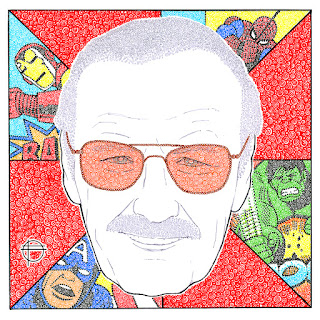 If you are any kind of a fan when it comes to comics, then the first name that comes to mind is Stan Lee. Second name, Jack Kirby. Honestly any other names, you should turn in your nerd membership card!


Comic books have always been a part of my life. I still have a couple of comics from my youth on which I wrote my name so my brother wouldn't take them. Most of the books are held together with that yellowing nasty cellophane tape.


Because I loved to draw, I'd copy the images and in some cases, cut out the characters and make my own comics from the comics. Years later, I thought I was good enough and sent samples of my work to Marvel only to have them returned with a nice rejection letter, which wasn't from Stan!

Now as an adult, I see his name included in things and I just know whatever it is, it will be cool just by association.


And that is what I hope I accomplished with this portrait of him.


Along with the portrait I wanted to mimic the Marvel movies opening credit with images of some main characters. The background characters would be rendered like their vintage 60s comic book look, but of course done with circles. With the amount of colors in the background, keeping Stan Lee’s colors simple was key to making it stand out.

Here’s some “Bottom Line America” advice, “Pay Stan whatever it takes to license his name and just call it Stan Lee’s Comic Con, it's classy and it's worth it!”


I'll be at the convention helping a friend with her table. How cool would it be if I could get a picture with Stan Lee holding the portrait?!