This week’s portrait is of astronaut, Scott Kelly. 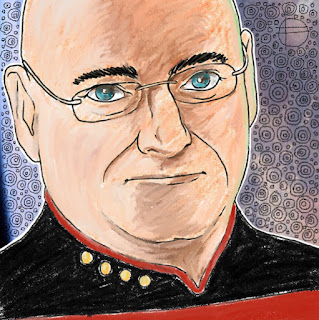 While most were all caught up with watching post Super Tuesday election news and the beginning of the end of the United States as a superpower, something big was happening elsewhere.

After 340 days in space orbiting the earth, Scott returned on Wednesday March 2, 2016. In my last portrait post I mentioned people thinking up big ideas, I think this is a huge idea. This drawing was unplanned but I was inspired to think outside the box with this one.

This is my first public posted iPad art!

I created this image on an iPad Pro, with an apple pencil, using several different apps. Drawing on an iPad is like working on a piece of glass. It really needs some kind of textured surface to feel right.

There’s a lot of experimenting going on in this piece. I tried to combine my line work with a painting style from the 50s/60s, and a photograph from one of Scott's twitter images in the background. Though now that I look at it, you can't tell what's going on.

I also felt it was fitting to put him in a Starfleet Captain uniform.

Staying on schedule with these portraits is turning out to be harder than I thought. You might have noticed I missed a week. I guess I could just create anything and post it but I really want each one to be interesting not just in the subject for the drawing but in the execution of the art as well.

Plus, last week was the Long Beach Comic Convention, which was fantastic! I posted some pictures on the www.cosplaylifedrawing.com website. I think I've inspired a number of people to start drawing and that's a great feeling. One participant, a 5 year old girl decided to mimic me and she drew the portrait of another girl at my booth. 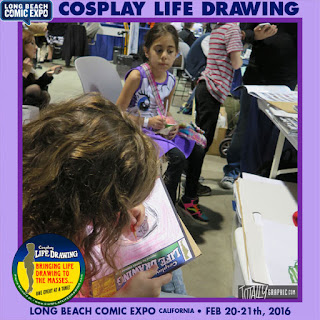 I felt like Bob Ross, but in my case, I am helping people to see and think through life drawing.

I need an agent ASAP to help me grow these events!