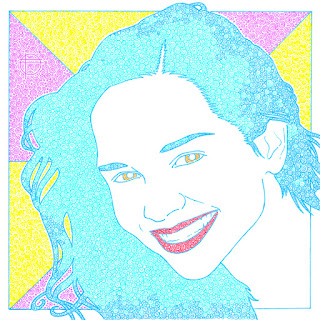 2006, Chicago, that was the year Late Night with Conan O’Brien went there for a week of shows at the Chicago Theater. And while I was there during my off hours was the time I first saw pictures of a model named Katie Fey and later come to know her as Eugenia Diordiychuk (won’t go into details, save them for another time).

She's a model mostly known for her pictures on the web. To say she is beautiful is an understatement in my mind. It's strange how seeing someone you've never met can give you feelings of familiarity and closeness. Hey, in case you're thinking it, I am not stalking her... or anyone for that matter, too much energy and time needed and I don't have enough of either to spare.

I've created art works of her numerous times, and in each one finding something different and interesting about her looks that's worth exploring.

I found out recently that she is an artist as well, she went to art school in the Ukraine. Her art work is pretty good.

With this art piece I wanted to capture what I perceived as her soft side, using pastel colors all over except for her lips in which I used a magenta red color to draw attention to her lips.

She’s definitely someone I hope I'll have a chance encounter with someday, who knows, maybe she'll come and draw at one of my Cosplay events. That would be so freakin' cool!
Posted by pbdotman at 5:55 PM No comments: 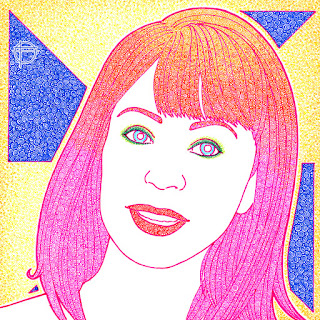 I had some morphine last week, kidney stones. Felt great for an hour or two, the pain was gone for but then it came back, not as intense but enough to make my day shitty. Over the weekend I had another attack, but this time I stayed curled up in bed and just endured the pain till it subsided and I passed out.


Lately life has been causing me a lot of pain and it's at these moments I tend to start buying more crap than usual. In this case, those Pops character figures from Funko, suppliers of my bobblehead addiction.


The life pain is from the fact that in a 2 month period, three friends past away. Sara Porter, Sherilyn Stetz and Doreen Austria. And my mother and aunt almost added themselves to this list.


My mom is doing better but my aunt is a day to day. I love these 2 people a lot, but then again, I lucked out, I have a great family. Nothing but great memories and hopefully many more new ones.

Sara I worked with back in New York. We were friends enough back then that she allowed me to use her as a model for some of my artwork. The one piece I did of her ended up being art for a Christmas card. 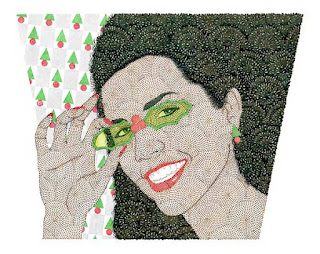 Doreen, was a true geek girl. Didn't get to hang out as much as I would have liked but the few times we did, it was pure nerd bliss.


Sherilyn was a friend but I did have a lot of contact with her. She was someone who always had great things to say and always had a smile. When I heard she was sick, I drew a get well card for her. And word got to me she was doing better. Then next thing I am hearing is that she's gone.


I decided I wanted to do this portrait of her for myself. I wanted to draw what I remembered of her. Sara, I have my art of her, Doreen, I have pictures of us together, but I had nothing tangible on Sherilyn. Now that's changed.

I miss these friends.
Posted by pbdotman at 2:30 AM No comments: