GHOST IN THE SHELL 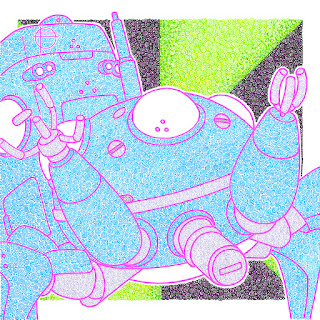 So this is the week the Ghost In The Shell live action movie comes out! We’ll get to see if Scarlett Johansson can actually play a Japanese female character better than a Japanese actress, watch the team of section 9 at work and most importantly we get to see the spider tanks or better known as the Tachikomas come to life!!!

So far they’ve kept them a secret, not revealing any pictures of them in any of the trailers which is ok I guess. Though they are the stars of the Ghost In The Shell series, and it would have been nice to tease us with an image, kind of like what Marvel did with the Vision, at the end of the trailer for the second Avengers movie.

I am absolutely fascinated with the Tachikomas. The design of the tanks are great, I would totally own one if they were available. The humanity these machine exhibit compared to all the other characters is interesting to watch. Their fascination with the world around them and trying to understand their own existence could be a movie on to its own. There was an episode where one when out on its own out of curiosity.

I am a bit surprise that so many fans have been so concern about Johansson being in the movie that they never once ask to see a glimpse of a Tachikoma.

This lack of pictures and talk of Tachikomas got me thinking, what would the series be like without them. Aside from Togusa, who is fully human, all the other characters seem to lack emotions to some degree.

So where are the Tachikomas?

In doing this piece of art I decided to use the show colors but I did change the black animation line drawing to pink. I thought it gave the imagine a sense of urgency or action. The background green and black to tie it all together.

I bought the Ghost In The Shell Pop characters by Funko. There's a Major, a Batou and a robot Geisha.

They better be in this movie...
Posted by pbdotman at 12:46 AM No comments: 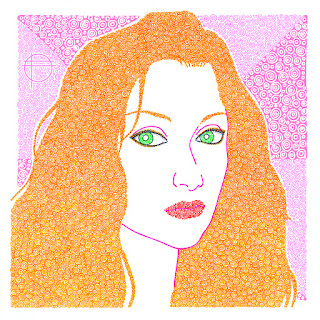 The art show opening, "Drawing Down the Moon” at Gallery 800 in North Hollywood was great! “A huge turn out” I love that line! But seriously, a lot of people came out  and I got to see a hand full of people I haven’t had contact with for the last couple of years, and they all live in Los Angeles, you really can lose people here, it’s way too big. 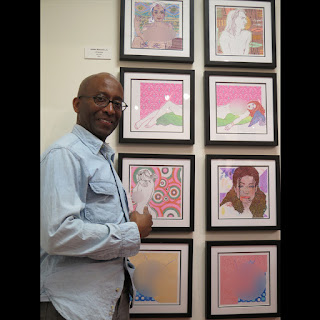 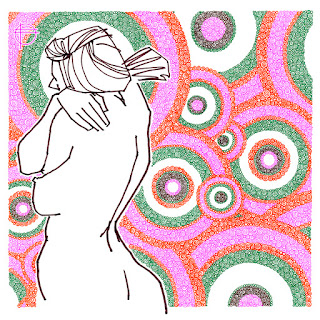 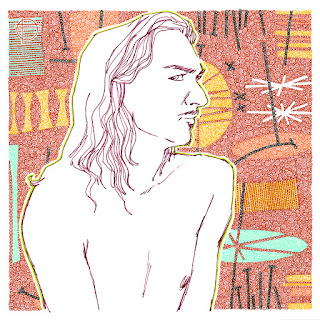 People were fascinated by the 8 pieces I had in the show and one in particular drew a lot of attention to itself due to it’s unique close up of a male model I worked with, not the above image, another one which was blurred (contrary to most people’s expectations, I didn’t submit a group of just nude women art, there was a nude guy among them).

I think that’s the challenge of creating art especially for myself, making it interesting and worth doing and showing in some cases. That’s why I find these weekly portraits worth doing and sharing. I try to challenge myself with each one. So far I think I am pulling it off, but it is getting harder each week.

In creating this portrait of Lorraine, I tried to bring out my inner 70s, trying to create a pop art look.

Also I did this just to surprise her. She’s an interesting person, I’ve never met her, only Facebook contact. She once sent me this “breakfast” video that took me off guard, I loved it!

So this is me giving back to a virtual friend the love and positive, crazy energy that she always sends my way.
Posted by pbdotman at 10:41 AM No comments:

CIRCLES, THE MEANING OF LIFE 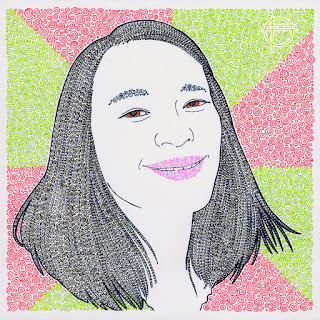 This Saturday I was working on one of my old school, Photoshop portraits. It was close to 11pm, after close to 7 hours of work, I was almost done. Hit save and a message came up that I saved already would I like to still save again and over write my current saved file. I hit yes and you can guess the rest.


The file f----in’ disappeared like it never existed! I ended staying up most of the morning redoing it and with the time change, I didn’t get much sleep, welcome to the end of my weekend. I’ve been doing these pen and ink portraits now for a while so this type of issue doesn’t exist outside of the computer. Though I have to admit, I did panic for a moment when I couldn’t find the original art of Flora to scan.


I know Flora from the Art Directors Guild’s Tuesday drawing workshops. What a great person. She’s an animator, very low key, and thoughtful. Flora reminded me of someone very close to me, my mom. I know that could sound weird, it’s just that she has a very trustful personality.

Working on this portrait I wanted to try combining an animation line style with the circles.I wish there was a way to count all these circles. Would it be crazy if sub consciously I’ve been placing the answers to all of mankind questions about our existence in the universe within the patterns of the circles without even knowing I’ve been doing so? The circles and patterns are not random after all. Maybe I’ll hire someone to do the counting.

Wonder if I’ve done a million yet and what does it mean?
Posted by pbdotman at 5:49 PM No comments:

This week’s portrait is, Flick! 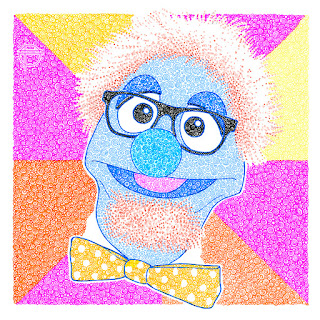 It’s Monday! it’s early!I am posting on time! I was worried I would be late again or worst miss posting today.I am submitting a few pieces of art for an art show in a couple of weeks at Gallery 800 in North Hollywood. These are life drawings done on Tuesday night at the Art Directors Guild in Studio City. They are all pen and Ink and circles. Lots and lots of circles!

A couple of weeks ago was the Long Beach Comic Expo. I haven’t had a chance to post any of the pictures from the convention yet. A lot of interesting and cool things happened. I told you about the Girl Scouts, and the drawing event. I did get to see a lot of people I know. But I am horrible with remembering names.There are times when someone will say their name to me and we start talking and within seconds, I realize I’ve forgotten it. It especially kills me when it happens and it’s a girl I am trying to impress.

That said, there was one person who’s name I didn’t forget, but it wasn’t a girl… it was a guy, not your typical guy. His name was Flick and along with another person named, Hero, they are the celebrity stars of a You Tube channel called, "The Nerd Soapbox”.

I did an unplanned interview with Flick and it just got posted online. I think it’s one of the best interviews I’ve done, it made me laugh! I got to talk a lot about my art, which was fun especially given how excited I am about doing these circle pieces lately. And we relived some Recliner of Rage moments. Also at the end of the video you get to see me do a portrait of Flick at the convention. Here’s the link,

If the above link doesn’t work, just go to You Tube and type in “The Nerd Soapbox”. Or copy and paste the above URL in a new browser window. The video is at the top of their channel list.

If you have time, take a moment and check it out. Promise you’ll enjoy this!Did I mention, Flick is a puppet?

I loved this video so much that I decided I’d make Flick my subject this week. Normally these piece take a couple of days to work on but I raced through this one Sunday afternoon starting around 5:30 and finishing at 10pm. My hand is killing me now, the typing seems to actually be helping a little, so this blog entry is a little wordy.

Thank you Flick and your production team for putting me right up there with the likes of Garrett Wang, Denise Crosby, and William Shatner and many other amazing actors and actresses you’ve interviewed over the years.Ok, now it’s time for me to turn off for a while!
Posted by pbdotman at 12:06 PM No comments: